Samit Basu’s new novel, Chosen Spirits, is a work of speculative fiction set in the near future — which is to say, even the things that feel radically different at first glance are, upon reflection, not so distant from us after all. The world of the novel, ‘New New Delhi’, runs on nearly untrammeled surveillance (enforced via next-generation tattoos called ‘Smartatts’), absolute compliance with government values (read Hindutva) — and an unhealthy obsession with social media influencers, called ‘Flowstars’ here. Dissent and your rights will evaporate, ask too many questions and even your own family might ‘unperson’ you, a la Orwell.

Chosen Spirits follows the lives of Joey and Rudra, who’ve known each other since they were children — but whose paths diverged a long time ago. Joey is a ‘Reality Controller’ for Flowstar Indi, curating his life for a legion of fans, worrying about her stubborn parents who are in denial of this new world and all that it entails. Rudra, the estranged younger son of a super-rich, unscrupulous businessman, is drifting through life until a tragedy forces him to come back to the fold. Meanwhile, a group of rogue Flowstars and rebels is pushing back against the draconian State  —  inquilaab’s in the air (this is still Delhi, after all) and it’s only a matter of time before Joey and Rudra’s lives change forever….

Excerpts from an interview with Samit Basu. Most of the future technology in the novel, like the Smartatt, is couched in the vocabulary of ‘wellness’ but in practice, they are advanced surveillance tools (like filtering potential romantic partners on the basis of sexual history, class, caste and so on). At a time when we have widespread privacy concerns around the Aarogya Setu app, this feels particularly appropriate. When did you first think about this connection between these two worlds  —  and do you feel that people (especially the demographic most likely to consume wellness products) are waking up to this phenomenon, generally speaking?

Surveillance and data grabs have both been escalating crises for most of the last decade all over the world, whether it’s authoritarian states grabbing your data or neoliberal ones tricking you into giving it up. In India we have both, with a rapid slide towards very blatant data grabs  — and when you add centuries’ worth of local oppression and surveillance, from families and local authorities, enabled with new tech; it’s going to be quite terrible. But on the other hand, there will also be climate change, vast unemployment and inequality, water shortage, pollution, pandemics and political turmoil to distract people from how bad they feel about surveillance.

I started writing this book four years ago, so it was not about the latest version of this surveillance escalation, but there will be many more down the years.

We are on a very clear journey towards extreme privacy loss, data-tracker bands, and then on-body tracking.

Even in the world of this book, this doesn’t play out equally; the privileged get to have the next generation of smart trackers with AI assistants, but the poor have their crude data grabbers/trackers embedded into their bodies. I think the degree of concern about any of this is very directly related to the degree of your personal access to the surveillance authority: above a level of privilege, the rules don’t apply, and people will be able to do whatever they like. Which is why the lead characters in Chosen Spirits are privileged and young, both people who have the opportunity to live safely, and succeed tremendously, if they choose to conform to ever-shifting rules.

Joey’s job as a Reality Controller is, in many ways, the heart of the novel. She exerts totalitarian control over her client Indi’s ‘Flow’. Ironically, all those clips of his that she chops and changes seem to have taken their toll on her life  —  the novel begins with a passage that describes her ennui and general sense of withdrawal from the world. Did you see this as a side-effect of her hyper-specific job  —  or did you think of it more as a generalised result of our dependence on onscreen images, our transformation into an overwhelmingly visual culture?

I don’t think Joey exerts totalitarian control over her client’s streaming Flow. I see her more as a very good magazine editor/YouTube channel producer of the future, who cannot help obsessively improve the product and care about it, even despite the people who benefit most from its success. Or like a showrunner, where she neither owns the show nor is the star of it, but is responsible for its excellence and growth and the overall welfare of the people working in it, a heavy burden for a 25-year-old.

I also don’t think she’s withdrawn from the world  —  that would apply much more to Rudra, the other main character, and his attempts to escape his shady-rich family and find a whole other life in some very compromised form of escape. But yes, Joey’s initial sense of ennui does exist, though, but I saw it as a natural consequence of both living your life under constant surveillance and the wariness that results from being a gatekeeper and a potential conduit to the things a lot of other people want. Because this is also a world where everyone wants to be a star, and wants her to discover them and manage their careers, which naturally affects all her personal relationships and makes it difficult for her to trust anyone. She also knows what happens behind the scenes, so has been disillusioned long ago. It’s also generational: I think people who are in their mid-teens now are going to grow up to be a lot cleverer, a lot less naive, and much more simultaneously calm and anxious than anyone in my generation. 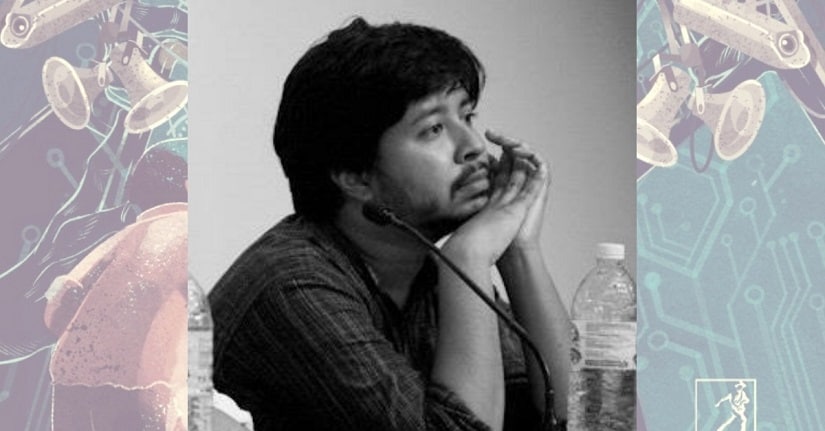 ‘We are on a very clear journey towards extreme privacy loss, data-tracker bands, and then on-body tracking,’ says Samit Basu. Image via Facebook/@bysamitbasu

At one point in the book, you mention that “everybody but the oligarchs were bankrupt”, referring to businesses that did not declare their complete subservience to the government, to the normalised Hindutva politics that now marked both sides of the aisle, so to speak.

A different section of the book talks about the “Russia model”, wherein the  State funds and monitors mini-uprisings against itself (similar to Chomsky’s concept of “the limits of dissent/debate”)  — do you feel that India has reached that critical point in its trajectory where the Government and the Opposition are now increasingly difficult to distinguish (like America, where there’s a large-scale #DemExit on the cards, because of disillusioned voters who resent what they see as the “corporate wing of the Democratic Party”)?

I don’t know, and I don’t think people at my level of access to inside information (which is to say I have zero access) will ever know. This is, after all, speculative fiction about a wholly imaginary future (though the attempt of course is, through research, to have the imaginary world be as close to the real one as possible) that is far more optimistic and positive than anything we will encounter in reality. My theory on this front is that a decade from now, in the world of Chosen Spirits, it will be impossible to tell who is actually running the country: collusion will be common practice, and we’ll see politics as largely empty theatre for those still entertained by it. I think the means of both propaganda and distraction will be more sophisticated, and access to any sort of truth will be very clearly determined by privilege, in a far more organised way than it is today. How much of this is already true now? No way for a person like me to even guess, and frankly I don’t even want to know; like Joey and Rudra, I just want to lead a normal, peaceful real life, and have no desire to save a world whose deeper machinations I have no knowledge of.

I loved all of the little Kalkaji jokes throughout the novel, and Kalkaji/CR Park’s reincarnation as ‘Little Bengal’. My favourite was the scene describing a march of young, would-be fascists with Netaji on their lips  —  but advertisements for Pure Veg restaurants (and their Paneer Specials) on the backs of their t-shirts. Could you talk me through this scene, why you chose to include this and so on?

I’m glad you like the way I’ve imagined Little Bengal’s future, it was great fun imagining this part of Delhi redone because it is an awkward clash of cultural stereotypes even today. The sponsored Netaji marchers are just supposed to be entertaining background detail: the intersection of different kinds of propaganda resulting in combinations one would not expect, like vegetarian Bengali authoritarians claiming Netaji for a set of values he opposed. But these strange creatures already exist, and there will only be more a decade from now. They’re also supposed to be a teaser/signal for some of Rudra’s family’s values.

At one point, Joey seemed to be slightly jealous of the fact that her parents led analog childhoods, so to speak  —  their lives from the pre-digital times could not be processed and used against them (as their current lives/opinions have been, and ruthlessly so). This fact is described with a slightly wonder-struck, mystical undertone, as though it were a superpower of sorts  —  did I read that vibe wrong, or do you, the author, feel wistful about this phenomenon?

It’s a combination of nostalgia as I personally grow ancient, and something that actually works for the book, which is that each generation has a false nostalgia about the past, and cannot imagine how people lived in such supposedly pure and simple times. Whereas people who lived through those times, like Joey’s parents, know that most of the injustices and inequalities that exist today have always existed, though possibly further away and less visually spectacularly for each era of the world.