Mount Maunganui: Chief architect of India’s rare 5-0 clean sweep over New Zealand, India opener KL Rahul on Sunday said he is not yet thinking about the T20 World Cup but wants to carry his sparkling form into the big event.

The 27-year-old from Karnataka was named the Player of the Series for scoring 224 runs in the five-match series at an average of 56. 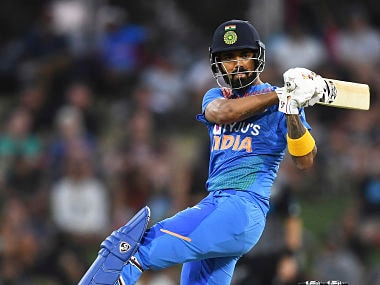 KL Rahul was named the Player of the Series for scoring 224 runs in the five-match series at an average of 56. AP

“I am batting really well now and I am happy to do the roles I am doing for my side. Not thinking too much about the T20 World Cup at the moment, but hopefully I can continue batting this way,” he said.

The T20 World Cup will be held in Australia from 18 October to 15 November.

India notched up a rare 5-0 whitewash over New Zealand with a seven-run win in the fifth and final T20 International and Rahul said the team’s ability to find answers in difficult situations was the key to its success.

“I am pleased. It is great to be standing here winning 5-0. Very happy that my performances could result in victories for India. We were happy to come into this series with confidence and to keep executing our skills every game. We came up with answers from every situation and it is a great result for me and the side,” he said.

“I think it is a winning habit that we have cultivated wherein we want to win every time we step onto the ground. As a team we keep believing in each other. Leading up to the World Cup, there were a few strategies that we wanted to try out. It just keeps giving us more and more confidence to keep going around.”

India will next play three ODIs against New Zealand beginning on 5 February and Rahul said they will follow the same process to achieve success in the 50-over format.

“We’ll relax a little bit over the next couple of days and enjoy the victory. But once we start with the next series, the process will remain the same,” he said.

“We want to win games of cricket every time we go out. The kind of cricket we are playing is fun to watch and we hope to keep repeating this.