Blog - Latest News
You are here: Home / Rishi Kapoor wasn’t afraid to be himself, both online and offline,...

“Hello people, I have just twittered” – with these six words, Rishi Kapoor made his debut on Twitter a little more than a decade ago on 17 January, 2010. But he hadn’t warmed up to the idea of communicating on the micro-blogging site yet. That took him another five years.

According to lore, it was during the filming of All Is Well with Abhishek Bachchan that the late actor was reintroduced to the site. “Thank you ABjr. Mutual admiration society. You truly are chip of the old block. See you on the sets shortly.” A rush of tweets followed this from other celebrities welcoming him to Twitter, a rash of new followers and an introduction to the ‘real’ Rishi Kapoor – who was funny, frank, unabashedly opinionated, passionate and more often than not crotchety. In this zero-privacy age, when his fellow celebrities still managed to keep a façade of correctness, Kapoor wasn’t afraid to just be himself. And, that’s what quickly catapulted him to being a Twitter A-Lister.

Kapoor’s new public avatar coincided with his second innings in the movies. Since Bobby in 1973, he spent the next two decades being Bollywood’s favourite romantic hero. It was only in the last decade or so that he began to ‘experiment and discover my range as an actor’, as he told me during an interview post the release of Agneepath. “I am having a ball right now. Like I am at a party and there is a huge buffet and I can pick anything,” he had added. 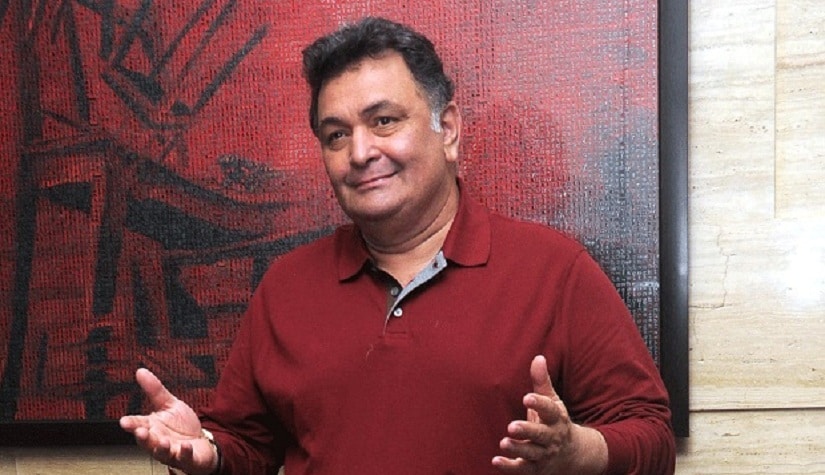 He was game to play anything from a gay principal (Student of The Year), a Dawood Ibrahim-esque don (D-Day), a cantankerous old man (Kapoor & Sons and 102 Not Out), a middle-class teacher struggling to make ends meet (Do Dooni Chaar) or a pimp (Agneepath).

Even as a whole new generation discovered Kapoor has an actor, his fans — old and new — began to discover the person behind the actor. Soon he was firing off multiple tweets a day; in interviews he explained that he had replaced his nicotine dependence with Twitter. And, he had a point-of-view on everything from self-styled god woman Radhe Maa to the sacking of Cyrus Mistry as the Tata Sons Chairman; from the emerging trend of Pakistan-bashing in our films to newspaper design. He wasn’t above calling out his colleagues for not attending Vinod Khanna’s funeral (‘Shameful. Not ONE actor of this generation attended Vinod Khanna’s funeral. And that too he has worked with them. Must learn to respect.’) or the appointment of fellow actor Gajendra Chauhan as the chairperson of the Film and Television Institute of India. (‘Advice. After all the protests and controversy, Gajendra Chauhan, the FTII Chairman should voluntarily retire. Will do good to the students.’). Even as dissent became a bad word, he wasn’t afraid to make public his displeasure at the beef ban in 2015 tweeting, ‘I am angry. Why do you equate food with religion?? I am a beef eating Hindu. Does that mean I am less God fearing than a non eater? Think!!’

When he wasn’t ranting about the things happening in the world, there were dad jokes (‘Good news. After CM Phadnis cancels the DP and Hawking plan, he exempts booze too. Now Maharashtra can have TARBOOZE and KHARBOOZE freely!’), film trivia (‘Sweaters.It was a passionate collection,over a period of time,which I used in films without repeating.This info for fans inquiring about it.’), sports (‘Wimbledon Why do the young ball boys scramble/haste as if they have ants in their pants?Normal running to collect the ball could also do it.’), self trolling (‘Confession.The only co star(tried thrice)with whom I did not make a successful film.And what a co star!Sorry Madhuri!’), and important Ranbir Kapoor-related information (‘Another thing. I am Not and repeat NOT Ranbirs Post Box that you can drop messages or post them. Thank you, I remain yours truly-Rishi Kapoor’).

Anyone who knew Kapoor well enough could attest to his love for food and Black Label Whiskey and this was reflected in his timeline. There were tweets about memorable crab claws at the JW Marriot, ‘ghar ka khaana’ at Bombay Canteen, eating at London’s Le Petit Maison with wife Neetu and son Ranbir and a disappointing birthday dinner at Daniel Boulud’s New York restaurant. Kapoor loved his foodie avatar so much he even briefly contemplated giving up acting to become a food critic (‘Showed my tweet to the manager. Refused to give the bill. Think I will make Food Review my profession. Adios acting and Films. This is better!’)

Then there were the sometimes inappropriate, sometimes sexist and very often rude tweets. He mercilessly blocked trolls, accused people of not having a sense of humour when he posted tasteless memes featuring Hillary Clinton and Kim Kardashian and slid into people’s DMs to abuse them when the virtual fights got heated.

All this and more was what Kapoor was in real life as well. One of my favourite memories of him isn’t from the numerous times I interviewed him on film sets or at his office in RK Studio, but from an after party at Krishna Raj, his beautiful home on Pali Hill. At a film party, Kapoor, who was in high spirits didn’t want the night to end. He invited a handful of people home for one last nightcap. I wasn’t a part of his ‘inner circle’ but by virtue of being the last person he was talking to when he decided on hosting the after party, I was added to the group. At home, he was a consummate host and took charge behind the bar while giving very specific food instructions to the house help. He remembered what everyone was drinking, made fun of the only vegetarian in the group (calling him plant-killer and laughing at the ‘joke’ multiple times) and regaled everyone with stories from the past. At some point, though, he must have decided he was done partying for the night. While everyone was in the middle of drinking, talking, eating… the lights in the room went out and a booming voice said ‘Party khatam’.

If Rishi Kapoor could tweet one last tweet, he’d probably say ‘Party khatam’ because it’s just the kind of thing he would say. And I’d like to believe he’s taken the party upstairs and walked in to that place saying, ‘Party shuru.’

Upload review: This Amazon Prime Original has an interesting premise, but fails...